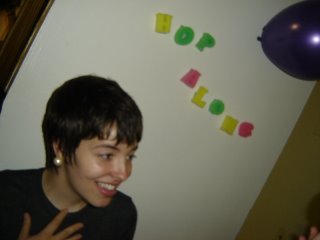 Frances Quinlan, AKA Hop Along Queen Ansleis, is refreshingly original. Her voice has a wide octave range that rises and falls with complete abandon. She never holds back. She tells stories, fills songs with many words and images, and delivers them at machine gun pace. Within a second, her voice can suddenly fall to a whisper or a hum, only to rise again with unprecedented veracity. Usually, singers with that range work slowly and build to a crescendo, never surprising the listener. To me, that is just sappy and easy.
In her full-length Freshman Year, she utilizes many instruments to create a sound that is distinctively her own. She incorporates a variety of bells, whistles, shakers, small cymbals, toys, and kazoos. The guitar is strummed and beat, hands are clapping, and the banjo, organ, and keyboards are added into the mix. While all of these instruments work their magic in a folk-like recipe, various voice tracks come in to create a feast. On a first listen, the tracks are so joyous and uplifting that her exceptional writing can be overlooked. She doesn’t rhyme or create verses, choruses, or bridges. The writing is atypical, with childlike references like the hot air balloon, the rusty trampoline, swollen boats, and a sea of concrete. These references pertain to family, friends, roommates, and childhood memories. She writes childlike dream sequences from an adult perspective and with scripted and running personal conversations. In the track “The Cactus,” she sings, “I wish somebody’d up and save me, save me, save me,” which builds, and the listener wishes to be saved. My favorite line in the song “For Sebastian From A Friend,” which she delivers with conviction, “Your guidance counselor was wrong, Hop Along sing your song. “ Advice people get along the way is usually misinformed or clueless. And writing like this, “I ain't no artist, I oughta be the dirt along the ocean floor /so when it drains I'll float to shore / now scathingly I'll throw the paint along my..."

The essence of what you hear on this CD, she can accomplish live without all the instrumentation. In January of this year, I saw her at Matchless in Brooklyn. There was a nice showing of her fan base, but the rest of the crowded bar didn't know her. The fans were up close and embracing Frances. She started the set using her guitar as percussion, and after she sang the first note, everyone moved forward. The bar was silent. People stood on barstools to get a better look. As the set continued, the audience clapped, stomped, and sang along appropriately. It is a joy watching her look up to recall every word and nuance, smiling from ear to ear, and singing to the rafters!!

Freshman year was Hop Along's first effort, which is remarkable. She is currently working on another full-length. Can't wait!!!

Wildebeest, AKA Matthew Winn If you’re looking for pretty or easy, don't even bother. If you want to see and hear a music legend develop, you’re in for a ride. Matthew Winn is reserved, and his musical counterpart is the beast within. In his own words, "this is not folk punk, this is serious." Wildebeest is an exceptional multi-instrumentalist playing guitar, keyboards, accordion, and harmonica. His guitar playing and picking style is fast and furious. I can only compare the caliber of his playing to that of M Ward, but different. On his 2005 full-length release Motion and Language, he played all the instruments except drums. He is a powerful songwriter, and the music and energy of his impassioned singing style hammer those lyrics to the listener.
The voice is raw, it screams for attention and cries for answers, and sometimes it is soft and tender. The songs tell of his year spent living in Spain. They reflect his reactions to a different culture, inner reflections, longings for home and familiarity, and his affirmation to take life on-- to change and grow. Although the songs are personal, they are universal and capture the essence of youthful concerns in a literary mode. In the opening track, “Wisdom Tooth,” he sings, “I’m getting my last wisdom tooth in now / maybe this will be the one that works,” and as the song concludes, “I’ll plant my roots on a wrought iron bench,” repeating that line over and over, declaring a realization. In “Fighting Windmills,” he sings to propel himself forward, "I’m gonna manifest some destiny.” The last song of the CD proclaims, “We’re not yet the tired husks of men / Our hands are still young, and our fingers need blisters.” He knows he has time to grow, but he feels a sense of urgency. This is just a sampling of the lyrical content, every song has memorable phrasing and meaningful substance.
The words on paper are powerful enough, but hearing them sung fervently adds additional weight that resonates with his listener. From beginning to end, this CD works as a whole and seamlessly flows with solo acoustic musing and a full-out band sound. This is not the kind of CD you hear just one song, you get the gist of its strength. Every track emphasizes different instruments creating a cohesive but diverse approach. Recently I saw Wildebeest at a show and heard him play his new songs, He was mesmerizing. I could barely recognize some of the older songs he played. They were new again, inspired by a more bluesy direction. His voice moans, howls, groans, and occasionally yodels. The guitar playing was more subtle. I wasn’t disappointed. I left, saying to myself that I just saw a music legend in the making. Home and Time EP 2005 Motion and Language LP 2005 Full-length vinyl will be done soon.
Posted by ARTIFACT at 10:35:00 PM 2 comments: 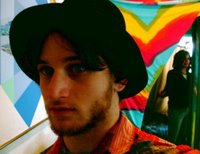 After listening to Fear Not, Distant Lover by Peasant, AKA Damien Derose, he got to me. It just lingered, and I couldn't shake it. Peasant's sound and songwriting quietly haunted me. His songs start out so simply. The beauty lies in the layering of instruments and harmonious vocals that give it depth and add dimension. He coats each song with delicate percussion and combines this with jewel-like guitar riffs. The gentle riffs glide around the song’s melody, creating various combinations without being repetitive. He is a skilled player. To complement the instrumentation, he overlays his soft tenor vocals employing three-part harmony with words and soft humming. His voice, while being very beautiful, has quirky, unpredictable qualities. That is part of the charm that draws me in. His voice can quiver, gulp, cry and, at the right moments in a song, be joyous. 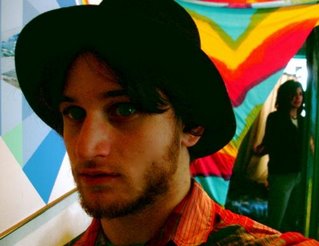 The lyrical content of Fear Not, Distant Lover is smart. The song “Icy Deep” has compelling imagery. In the line, "Something sharp has cut my blood out, there's my blood now, there’s my blood now,” he cleverly repeats and fades thoughtfully. In the love song “Yes It’s True,” he juxtaposes "shot in the head with love" to describe love's powerful hold. Besides loves longings and sad songs, he tells stories about Lonnie, a simple craftsman whose craft is obsolete, or of Joanna, a mother that is cherished and remembered after death. He also conveys a message in the song “Don’t Quit.“ To describe the frustration of war and conflict, he writes, "All we are doing is staring at a screen, no one will hear you scream". He continues, "Take a little time to understand the man who walks beside you". His philosophical and mature writing is not overbearing-- just there to ponder. He is young and wise. Through his music, he has a voice with something to say.
Playing live, Peasant connects with his audience. His love of music is evident, and that sincerity is a pleasure to witness. The show is basic-- a beautiful, caring voice with a guitar at its finest! While this CD has been his focus since its release in 2005, in October of this year, he will be pressing a vinyl single with four songs presently featured on his Website. These songs will be part of a 14-song full-length that he will release in 2007.
Posted by ARTIFACT at 12:32:00 PM 2 comments: