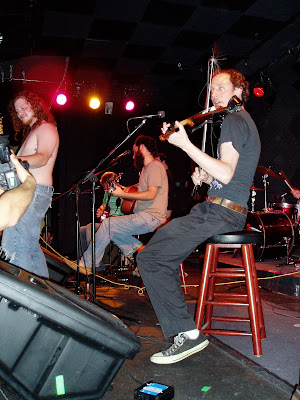 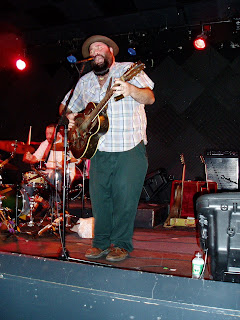 The Luna Lounge is a nice square venue with high ceilings and a wide stage. It was the perfect venue for the celebration of o’death’s album “Head Home,” re-released on Ernest Jenning Records, a NY label. Joining them for the festivities was the opener Reverend Peyton’s Big Damn Band from Indiana. This was the Reverend Peyton’s Big Damn Band’s first venture to New York, and they said they were a little apprehensive. Well, they were welcomed with open arms, cheers, laughter, and a very heartfelt and enthusiastic encore. The band performed a rip-roaring set of Mississippi Delta blues, catapulting that genre to exemplary levels.
The Reverend Peyton bought three beautiful vintage acoustics for the stage. He fingerpicks and slides simultaneously and uses unusual strumming patterns to create melody and bass drive while singing joyously. He is a guitar virtuoso. It was a joy to watch him smile as he played the guitar as close to his face and ears as possible to hear the beauty of his favorite friend.
Reverend Peyton is a big burly, bearded man with a broad voice. Joining him on the stage was his wife, Washboard Breezy Peyton. Wearing special gloves to hold her metal picks to strum. The washboard provided wonderful zing to the percussion. She is buxom, and her stage presence is refreshingly different. Let's just say her formidable chest size moves with each strum of the washboard, and her facial expressions are animated. Jayme Peyton, the Reverend’s brother, kept the forceful high tin beat with just a snare drum.
The stories in-between song selection was a hoot. Introducing the song “My Cousin’s On Cops” was a great story and a true one. The song got the attention of the Jerry Springer show, and the Big Damn Band was asked to perform it on the show. They, unfortunately, couldn't play that song on air because “Cops” was on a competing network in that time slot. But we heard it in all its glory. Taking out a new guitar, he stated, “I got to warm up the guitar,” which he did immediately. We were also treated to a song about his drunken father, “My Old Man Boogie,” the awesome “Train Song,” a gospel number, and ending, “We Shall Not Be Moved,” a cover protest song Fantastic.

O’death took the stage and the band played through an exhilarating, dynamic sixteen-song set. Leaving the audience in a state of euphoria and then exhaustion. During the set, the audience became enthralled in a ritualistic dance, their bodies limber and letting go completely to the rollicking, kick-ass, and thunderous bluegrass and velocity-driven Appalachian mountain music.

This band is not genre specific. To expand their music, they explore various distinct genres, then edit to synthesize. It has familiar qualities. There are distinct connections to folk roots from eastern European cultures and classic connections like The Band and Neil Young. The recognizable sounds, mixed with the unexpected, create a discourse between the music, past to present. They combine the guitar, bass, banjo, drum, fiddle, and French horn by Dan Sagar, along with the unique vocal styling of Gregory Jamie.

The sound was not deafening and not overbearing like punk or rock that, sometimes sacrifices the voices and instruments for effect. o'death’s sound was loud, but I could still hear the subtlety of the instruments. The drummer David Rogers-Berry is beyond animated. Driving the rhythms to levels of velocity that ebb and flow unexpectedly. The fiddle player Bob Pycior is also the driving force of sound and percussion. His playing is uniquely varied from classical sweeping vignettes to countrified fiddling, with fast and furious bowing that breaks mock speed. The set started with “Down To Rest,” with a banjo intro by Gabe Darling. The entire audience participated in singing / OH BABY / down to rest /. During the song “O Lee O” Gregory Jamie rose from his seat to speak in tongues, making strange garbled sounds. “Only Daughter” was spectacular live. “Adelita,” featuring fiddle, was aided by the audience singing /head home / head home /. Their voices rose like a chanting chorus. Jamie Gregory’s voice is always upfront, but the unison of all the voices added depth and intensity to the live performance.

I loved the unreleased song they played toward the middle of the set. It started with slow polka timing emphasizing the bass playing of Jessie Newman and highlighting the classical rendering of the fiddle. Without warning, the band played so fast. Beyond fast. It was at that point I lost it. When the song was over, I had to hold on to the edge of the stage to regain my equilibrium. By the thirteenth song, the audience negotiated a three-song encore ending with Rise UP, a big friendly finale. The band stood clapping, chanting, and basically thanking the audience and well-wishers for coming to their CD release show.

This is the kind of band that can go beyond the song. I feel the musicianship could be taken to a level of improvisation, o'death could handle this challenge successfully. I don’t mean a jam band experience, but more of an artistic expression. They could explore live their avant-garde wanderings, almost like an outsider artist whose vision has to be realized.
Ernest Jenning Records(US) 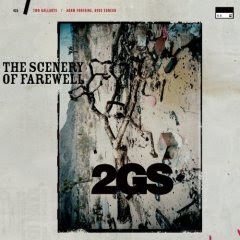 The Two Gallants new EP release entitled “The Scenery Of Farewell” is an outstanding acoustic offering. The five tracks exemplify folk music with a hard edge and a soulful timbre. They’ve successfully woven lyrical ballads with a sound that has weight and resonance.

Adam Stephens raspy worn vocals and astute harmonica playing, cries and bends to reach emotional heights. He boldly finger picks the guitar, while Tyson Vogel lends percussion elements and sings in a softer and higher vocal range. Adding to the mix are the violin, cello, stand up bass and piano passages that fill the memorable melodies.

I love the strong acoustic quality of these recordings. The songs were produced and recorded on tape by Alex Newport. This required several live takes to arrive at the right feel, rather than piecing together and editing parts. The end result is a very organic minimal sound.

The writing style is indicative of oral histories written in the first person. The song structure opens up avenues for the listener, using poetic lyrical phrasing and a variety of reference points.

The first track “Seems Like Home To Me” is a tour de force, capitalizing on the vocals of the two members. The song starts off with the Two Gallants singing in unison. Then in just one passage Stephens’ sings alone deriving an affecting rendering of the lyrics. This song about longing to be set free, proclaims / baby let your light shine on me / when I’m lost on the road / you know you can set me free / you can ease my love /. As the song builds the forceful steady beat of the bass drum is added leading to the songs crescendo, a rich and glorious chorus declaring / I’ve been gone so long / it seems like home to me /.

“Lady” starts out slowly with guitar strumming, as an aging man struggles over being / too busy running out of time /. He thinks about his regrets and worries over his personal troubles while comparing them to others. Thus the weaving of contrasts… / something reeks of heaven beneath the highway where the hobos sleep / where the hobos sleep / and I laugh about the pains I keep /.

The emotional description of despair in “Up the Country” works because the heartbreaking words are perceived through the instruments. Blending the harmonica, violin and cello to hauntingly pause, as if to sob. He proclaims / now there are criminals in my head that lead me to disgrace / so lost I best not be found /. The sadness seeps in and he laments / my tongue no longer tastes / and states / not sure how long I’ll stick around /.

The soulful harmonica plays in “All Your Faithless Loyalties” as the song starts with the opening phrase / let this be are last goodbye /. Describing the tentative nature of breaking up, / I’ve known lonesome things you can’t come back from /. Realizing that the inevitable result will be… / I know we’ll be strangers in the end /. The choral segments sung beautifully by Vogel, reflects the weariness of in-decision as time goes by singing / oh oh oh oh oooh.

Ending the collection with “Linger On” The piano, violin and harmonica intertwine and swell to present the essence of lingering thoughts about the end of a long and complicated relationship. Stephens' sings / I know I never meant you any harm / the suffocating shelter of your arms / if I did you wrong / It wasn’t me, but you who wrote this song / linger on / linger on /… PLEASE….

This evolved collection of songs is a welcome addition to the growing discography of this young band. It does linger. Their follow up will be a full-length release due out in September of this year. It is an electric session recorded again with the help of Alex Newport. I look forward to their next offering.

Recorded on tape by Alex Newport at Hyde Street Studios in San Francisco.
Featured: Jackie Perez Gratz on cello, Anton Patzner on the violin and Chico Tunney on the upright bass. Artwork was laid out by: Mr. Maust of the cold war kids. The Front photo by: Wignall and back photo by Mr. Jakie Peanuts Snavely.

Track listing: 1. Seems like home to me 2. Lady 3. Up the country 4. All your faithless loyalties 5. Linger on