Emanuel and the Fear @ The Delancy rooftop, Afternoon Scores Emanuel Ayvas’ brought an ensemble of four and delivered lush scores with tabulators, and music stands in place. His poetic writing and emotionally delivered vocals, accompanied by violin, cello, and guitar, created a toned-down but perfect acoustic orchestral pop and afternoon score for a roof garden space. Their set was a smaller representation of a group.

Listening to Emanuel and the Fear recordings exemplifies the lush, ambitious arrangements full of complexities and swelling of orchestral passages with smart, lyrically emotionally delivered vocals.

Bryan Vaughan, founder of their label Paper Garden Records has a passion for music he loves and believes in, so I should have followed through and heard them sooner. Drink Up Buttercup is a very different band in the early afternoon. But this is not Drink Up Buttercup Lite, anything but. Although they abandoned their drums, amps, garbage cans, and kinesthetic body contortions, they highlighted the muscle of their vocal muscle. They stretched their harmonic layering of show-stopping standards, adding detailed appendages. Showing off their incredible versatility and giving the tired genre "Barbershop" a vibrato edge. Cale Parks brings warmth to Techno, blending cascading dance beats and looping of original music with synth and drum machine. Live Cale Parks drumsticks twirl through the air and hit his mark. The baton twirler, soft crooner, and synth composer do it with precision and finesse. Adding two new players on guitar, bass, and keys to his live line-up. Performing as a one-man band is hard, he said as he introduced his new bandmates, saying, “how nice it was not do this alone.” The packed, dank basement at the Delancey was the perfect setting to be transformed into another place. Cale Parks and Company took me there. Sgt. Dunbar and The Hobo Banned packed the house and the stage with eight musicians and every imaginable brass and string instrument. I love the Hobos and have seen them several times. Their instruments were in full force featuring many songs off their new EP. They played the title track, "A March Through Charles Mingus' Garbage Pile," which featured a vibrant mix of Folk and Jazz, a direction they are forging ahead with. The two new songs they debuted forecast a vital and original direction.

The musicianship is something to behold they have become a much tighter entity without losing their energy and heart, displaying the joy of playing together. What is also fascinating is the seamless exchange of instruments throughout the set. Whether blowing, singing, or strumming, everything works. This is a democratic collective where various members share the lead vocal helm adding diversity to the mix.

Sgt. Dunbar and The Hobo Banned were full of bite. All the instruments and vocals united and filled the space with joy and substance. When the set was over, I walked through the crowd, and the word choice was amazing. Pink Noise makes lots of noise from metal shredding guitar and bass and pounding drums but could not drown out the hefty and soulful vocals of Sharon Sulami This was a set of pure intensity with incredible exchanges between instruments. The noise of exhilaration and contrast played with the force of unpredictability. Invigorating smart noise. To say I was delighted to see Little Teeth is an understatement. The twosome of Sofia Bell and Dannie Murrie recently added Sean Real to their inner circle. Their original music is Folk as an art form played with a conviction of sensibility and spirit. Their all-out abandon of song structure focused on experimentation, strange but beguiling harmonies, and escalating emphasis on vocals, drumming, cello or banjo.

I was outside socializing when the band set up and was flabbergasted when I moved to the front to find the most intricate found object drum set de jour, including a small xylophone. Dani Murrie strapped on an assortment of shells and bells from ankle to knee.

During the set, they brought out some additional homemade contraptions. The traditional instruments were plucked and bowed with attitude adding to the disjointed samplings of sound that fried my brain from overdrive of the unexpected. The drummer Sean Real has a passion for playing. A joy to watch.

the music sounds like a much looser Coco Rosie or The Roaches scrabbled. They bring it on with guts, punk, and moxie. Halfway through their fifty-state tour, they stated, “We showered tonight.” Everyone cheered. I would be remiss not to mention how much I enjoyed Zebulon. I loved the music played between sets, the food, and the great staff! Blood Warrior's brand of Folk is weighty with thump-stomping percussion, great choral harmonies, and the vocal awesomeness of Greg Jamie. The music can soothe like a lullaby but don’t get too comfortable because these gentle warriors can bring up the volume. Their voices swell; electric guitar leads and acoustic strumming intertwine with shakers and emphasized bass drum, giving traditional Folk an edgy twist. Making a fashion statement at CMJ is an anomaly, but Max Vernon intends to please both visually and sonically. He walked onto the stage wearing an asymmetrical googly eye ensemble of his design.

He started the set by saying, "please excuse my unnecessary banter, I have to fill this forty-minute set," and fill he did. Max Vernon's verbal acuity does wonders for in-between songs, but that gift translates well to songwriting.

Standing confidently at 6’4 behind his keyboard and almost strutting, he played complex pop/jazz arrangements. His vocals dared go from low to falsetto, adding unexpected touches to his recorded material. What I found the most fascinating was his ability to seamlessly create the backup vocals. In between, he played three songs on the guitar.

A highlight was "Around Your Finger," with friend Emily singing the chorus / I hate to tell you / that I had more fun / When you were hooked on drugs /. "Psycho Bitch" a new one, is a song in the same vein. His second new offering had a haunting juxtaposition between an irregular chord repetition and a beautiful vocal. He ended with a Liz Phair cover, "Canary."

Some Shot offerings from my brief schedule of events at CMJ. Hey, I got a full-time job, so this was fun but ain't easy. Almost done writing about the bands below. Check back or home, scroll Little Teeth at Zebulon Emanuel and Fear @ The Delancey Drink Up Buttercup @ The Delancey Great set planned by the awesome eight-piece band Sgt Dunbar and the Hobo Banned. They plan to play eleven songs with one, possibly two songs never played in public, tomorrow at 9:00 @ Zebulon. All Things Considered, Blog made CMJ 09 recommendations of several bands, and the Hobos are included.

Everything Is Pt II from Tom Muro on Vimeo.

There are four more stops. Catch the mayhem. This latest video, Drink Up Buttercup, performs Heavy Hand live on East Village Radio for the CMJ Festival. Believe me, this is restrained.
More CMJ & Tour Dates
Posted by ARTIFACT at 10:09:00 PM No comments: 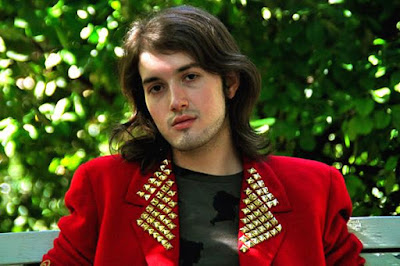 Photo Credit Jacqueline Zaccor
Max Vernon reached out to me about a year ago, and I've been hooked. He will perform tomorrow at Kenny's Castaway, his first CMJ debut. Max Vernon has a vocal instrument that is deep and resonating, its clear tonality has reach and depth of maturity. With a signature voice, he delivers piano-driven melodies with a broad lyrical palette of intelligence. At twenty years old, he composes music that can move in many ways, like the Woody Guthrie of Pop to make a bold comparison. OCM 2/ 09 Here Below is a sweet taste of his music in one of many homemade video entries!!!
Posted by ARTIFACT at 6:20:00 PM No comments: