Max Vernon's Musical, The View UpStairs is an Unfiltered View of LGBTQ History 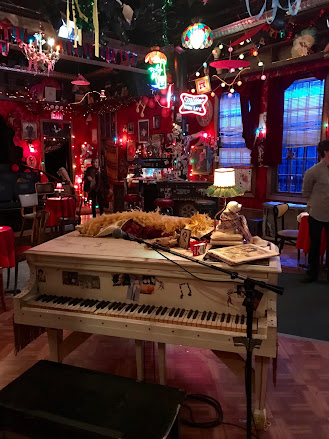 The Lynn Redgrave Theater was transformed back in 1973 into the gay bar, the UpStairs Lounge. Forty-four years earlier, a fatal attack of arson took the lives of thirty-two individuals and injured fifteen others. The UpStairs Lounge was home, a paradise of sorts, a haven for queens, queers, hustlers, and the unwanted and marginalized; it replaced the homes, families, and churches where their “kind” were no longer welcome.

Max Vernon’s passionate and inquisitive nature propelled him to write the book, lyrics, and music for the musical The View UpStairs. Directed by Scott Ebersol, the play is a snippet of time when a young gay fashion designer named Wes, played by Jeremy Pope, buys an abandoned space in 2017 that once was the UpStairs Lounge. There, he meets the ghosts/patrons as they surprisingly appear in retro 70’s attire among the inventive cheap yet chic decor of the lounge in its heyday. They enthusiastically swirl around the bar and sing about a place they call home / I think I found some kind of paradise / no angel wings / or fairy dust / just a rush of lust / but it’s alright. /

Vernon’s editorial style turns the future inside out by presenting it through the perspective of the gay community forty-four years earlier. Their wisdom is refreshing, and their reactions to Wes’ virtual world of selfies, branding, likes, and hashtags are hilarious and provocative. Wes tries to brag about the future as he sings /ain’t it great how far we’ve come since 1973 / the future is great there / you are what you own / if I could take you back with me / your mind will be blown /.

Throughout the play, the ghosts teach Wes many lessons and remind him of the rights he takes for granted. He, in turn, is perplexed by the hiding, hustling, and sex lives of his ghost hosts; as they live their lives in the shadows. The trajectory of their futures is altered by rejection and limited choices. Wes' new love interest, Patrick played by Taylor Frey, explains why he became a runaway /father sent him away / with a plan / fry the fairy out of him / and he’ll come back a man / more or less / the doctor guaranteed success /.

The show tackles many issues through the lens of LGBTQ history, including Trump’s election, and achieves a cutting edge. Hanging like a dark cloud over the theater is impending death, with Aids just around the corner and the future of arson. / how the eighties came killed all your friends / you just don't know it yet /. Weighing heavily and interspersed between dancing and song is the anxiety and fear of new laws that undermine all the rights gained in recent years.

I fell in love with the talented, diverse, and lovable cast. The staging created a viable interaction as some audience members sat in the lounge among the actors who worked the aisles. The fabulous Queen den mother, Willie, played by Nathan Lee Graham, delightfully shares his earned wisdom. His over-the-top personality is the comedic relief and connection to the show's heart as it offsets the dark content. Another significant aspect of the script is the invisible patron, Dale, played by Ben Mayne. He is rejected by his peers and exposes the flaws in their community, much like any other.
The beautiful score, effervescent cast, sequence, glitz, and glam can’t camouflage the issues facing the LGBTQ community. But what a way to tackle these matters proudly, singing and dancing into the future. This timely musical celebrates and honors the lives of the patrons of the UpStairs Lounge in all their colorful and unfiltered glory and paves the way for the fight ahead.