Hop Along Queen Ansleis's new breathtaking electric version of "Bride and Groom" is a reworked oldy from 2006 self-released Freshman Year. Her airy, breathless, crazy energy and commitment to singing are notched up to match the music. The quiet beginning with taps on the glass and electric slide guitar add contrast to the fabulous intensity that develops. Hop Along Queen Ansleis is a female-fronted band with Frances Quinlan (guitar and vocals), Dominic Angelella (electric and slide guitar), and Mark Quinlan (drums). They spent much of the spring recording three songs for a 10" vinyl called Wretches to be released by Salinas Records. It will be available for purchase around mid-July and during the tour from Pittsburgh. Hear it on Myspace! and CATCH THE TOUR!!!!!!
Posted by ARTIFACT at 5:14:00 PM No comments:

Labels: "Hop Along Queen Ansleis/Hop Along" 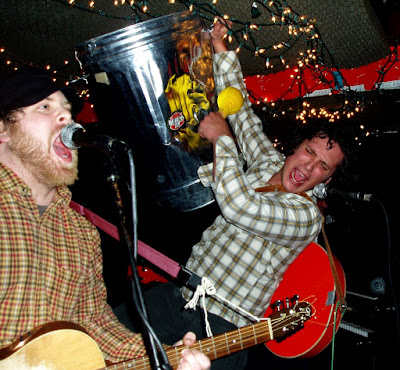 How many times have I seen Drink Up Buttercup! Never enough! Since I was the first New York Blogger to write about Drink up Buttercup, I thought it would be cool to post a summary of all the live shows I've had the pleasure to see and review. The awesome photograph above this copy is one of mine! (Embed it, but credit!) That awesome shot was taken at the Cake Shop, where I met the photographer Maryanne Ventrice. She had no idea what she was in for that night and, ever since has made it her mission to document almost every Drink Up Buttercup show in NYC and Brooklyn. It's not a competition, but she's winning. 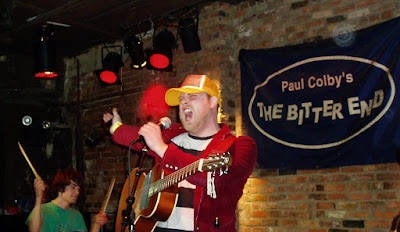 1. PA Bands Bus Trip to the Bitter End 5 /14 /07 This is a newly formed band with James Harvey having the most experience formally of Playwright. They are just getting started and only have demos out. Playing to a supportive crowd in Doylestown PA gives them the opportunity to hone their craft with supportive fans. At some point, they have to venture out to the cold hard world. I think they will get a warm welcome. More
2. Drink up Buttercup at the Cake shop 9 /15 / 07 It is great to see a young band with so much promise and enthusiasm, eager and ready to make somebody's day. They made mine. More
3. Fun Sound of Contagious Delight 01 /08 Headlining at the Cake Shop makes it better. Their insanely zany acrobatic stage antics, mixed with a full-bodied sound of harmonic delight, produced an atmosphere of sensory overdrive. The garbage can and auxiliary percussion were banged, and the harmonies were fully intact. Involuntary operatic passages and rough bawdy instrumentation all came into play. What emerged is a band worthy of praise. continued 4. Drink Up Buttercup Piano’s Residency 2/ 20 / 08 I love this band. What struck me is the gloriously jam-packed uproar they create. Extraordinary harmonies, lyrics, and instrumentation are audible simultaneously. Nothing is sacrificed. Edgy disorder gone right! more! 5. Drink Up Buttercup Less Artists More Condos 04 / 2008 My astute and musically credentialed friend described their music with one awesome idiom, “Campfire Metal.” Shit, wish I had come up with that one. and..... 6. CMJ Day 2 Seriously Happy 10 / 25 / 08 Drink Up Buttercup is a conglomeration of everything right with music. and.... 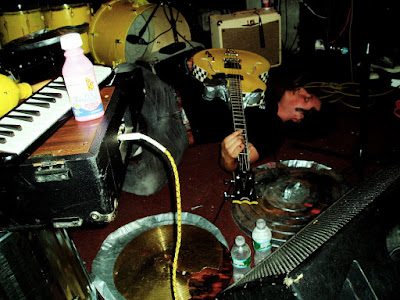 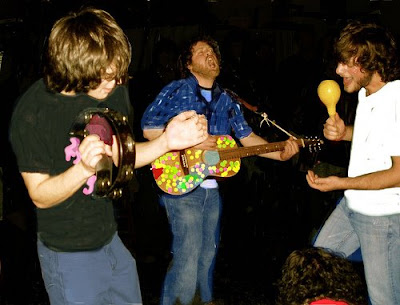 Drink Up Buttercup's performance at the Trophy Bar at the Hooves on the Turf showcase for the Northside Festival blew me away. The Drunken barbershop quartet proceeded with full-tilt acoustic gusto. The diaphragms of all three vocalists were in working order, enough to project across the packed bar space. With only one instrument mic for the guitar available, their loud and passionate harmonies rose above aggressive percussion and the plugged-in Casio. Drink Up Buttercup's spirited set was the kind of commotion needed late in the afternoon.

Guilty as charged, I contributed to the first round of drinks, and too many followed within the set. But the band put on a spectacular show and somehow had enough energy to be whisked away in their van to do a video for L magazine. When I asked Simon, their manager, where they were going, he said, "to North Sex" in his thick Irish brogue. At the time, it all made good sense. I was just too aroused to realize they were off to North Sixth Street.

Great short clip of Hop Along Queen Ansleis and band covering Beyonce's "Single Ladies (Put A Ring On It)." Start making plans for a full US tour in July / August with p.s. Eliot.
Trust me on this one. Press Play!!!
Thanks to JackieNevin for filming.
Posted by ARTIFACT at 11:48:00 PM No comments:

Labels: "Hop Along Queen Ansleis/Hop Along" 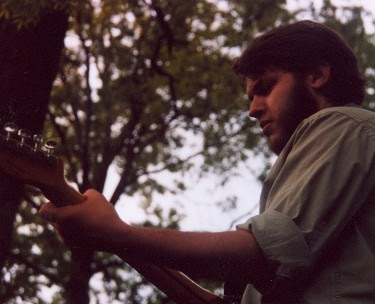 The Wailing Wall was on Soundcheck, WNYC's daily talk show about music hosted by John Schaefer.  While driving, the most thrilling and obviously live music was on air. Not the usual slick coordinated sound but a full, multi-instrumental folk feast. I perked up and suddenly remembered that the Wailing Wall was doing this gig on the radio.
The Wailing Wall is the project of songwriter, player, and singer Jesse Rifkin and the collective of musicians who he records and tours with. On any given occasion, new people will join him on the roster for a live show. In fact, the band assembled for this radio gig were musicians who only played the material the night before. He loves hearing a different lineup of musicians presenting his songs. From his point of view, it keeps the material alive and vital and brings curious fans back to live and always-changing shows.

The interview was very curious. NPR isn’t exactly mainstream, but it seemed kind of odd that the DIY collective philosophy of Jesse Rifkin was foreign to John Schaefer. Jesse was steady in his convictions and eager to explain his music philosophy about community, sharing music for free, and his rotating live music concept.

I  applaud Soundcheck for giving The Wailing Wall the opportunity. Hearing the music and the interview helped me get off my miserable self-doubting and lack of posting ass and get back to writing about awesome music. Thanks, Jesse, for revitalizing my spirits and doing things your way! Will be downloading it tomorrow and look forward to The Wailing Wall live experience!