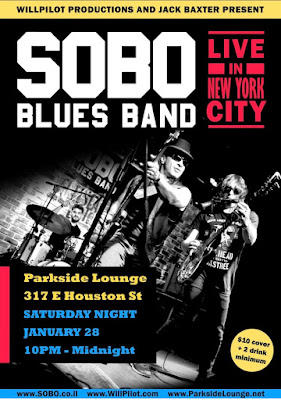 SOBO Blues Band from Israel played at the Parkside Lounge last Saturday, January 28th, as a first stop and warm-up to their final destination, the 2017 International Blues Challenge in Memphis. Their style of playing is what I call "happy blues." They exude the purest form of pleasure in music collaboration while celebrating the American art form they treasure and proclaim is universal.

Assaf Gansman, the bass player with deeply soulful vocals, is also the band's master of ceremonies. Daniel Kriman shreds on electric resonator slide guitar and harmonica, creating the group's signature sound. With the first beat of drummer Eden Bahar, I knew I was in for a treat. He is classically trained, but unlike other players of that ilk, he brings grit to the mix.

Together they generate love from the stage. Shout out today; they made it to the finals, sending their brand of love in the form of blues to Memphis.


SOBO was founded in 1995 in Jerusalem by the songwriting team Assaf Ganzman and Daniel Kriman. Ganzman is also co-owner of the legendary Mike's Place live music bars and restaurants in Israel. Two years ago, the team was joined by 24-year-old Eden Bahar, considered one of the best percussionists in Israel.