The Most Beautiful Rock Music I Never Heard 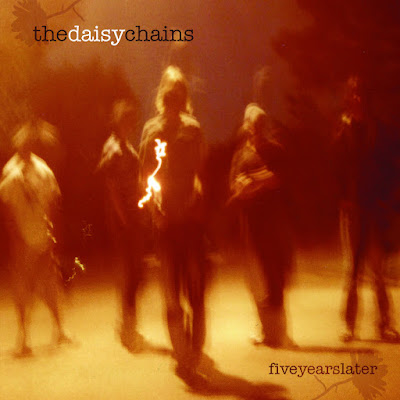 I accidentally heard some extraordinary music. It is the most beautiful rock music I never heard. I made it my goal to find “the band” and was completely blown away by the story that unfolded when I finally met Robe in person.  I am writing this review with his permission. My mission is to bring this beautiful work into the universe and off a dusty shelf. ~ OCM

Creating music was his gift and a lifeline for expression rather than a commodity for sale. In 2000, he completed a diary in the format of a thirteen-song rock soliloquy, recorded on tape in his bedroom, basement and bathroom over three years.

“It has been five years since I was diagnosed with type one insulin-dependent diabetes. I am broken with illness. Simply said, this record is a compilation of my life over the past five years.” This is how the liner notes began for the album Five Years Later by the fictitious band The Daisy Chains.

At age eighteen, Rob McCleery’s opus was completed primarily as a solo project in the sanctuary of his parent’s middle-class home. The mastered CD was packaged as The Daisy Chains with many contributors while "only a few friends actually helped out."

"The "band" also really didn't exist, I just wanted it to look as though it was a band. Right around the time I finished the record, I realized how personal it was to me and didn't feel comfortable having anyone listen to it. I felt exposed. So I stuck it on the shelf and forgot about it." ~ Robe

Five Years Later is a whole concept album produced in the form of a movie script. The album’s first track begins five years after McCleery's diagnosis, and songs two through thirteen explain how he got there. While some songs express his feelings about societal issues, most are a confessional dialogue where the reference to I, you, me, are interchangeable, as he counsels his broken ego through the medium of his former stronger and healthier self.

His small bedroom was ground zero in the process of creation. Words emerged like a tumultuous stream of expression from a microphone to tape to form the first recordings, one of which is the song “Gunshy.” McCleery usually composed on the piano first and later fleshed out the mix with a wide array of instruments. He had an innate ability as a musician, but he embarked on the recording process as a novice. Obsessed with learning and a desire for perfection, he utilized every recording technique he thought would do the work justice.

McCleery captured the music zeitgeist of the 90’s rock genre but had the instinct to meld hard rock, flavor it with folk and pop, and splice it with old country traditions. Five Years Later has hard-hitting guitar licks, slamming screeching reverb, twangy strings, catchy melodies, piano arrangements, and a variety of percussion, all of which reflect the multi-instrumentalist dexterity of McCleery’s raw talent. Adding to his acumen was a newly found enthusiasm for jazz which he devoted to only one track titled “Dark Blue.”

The signature imprint on this album is McCleery’s vocal style;  His fractured bedroom vocals, raspy intimate whispers, and tortured screams draw the listener into a private space. It captures vulnerability, fierce intensity, and tenderness.

“Five Years Later,” the first song, comes on like a roar, with screeching guitar reverb and a mix of hardcore nineties rock. What’s unusual is McCleery has combined his tortured screams with fragile vocals. Together It works to express his anger, frustration, and need to gain control over his life circumstances. “Believe It” is a song motivated by McCleery’s protective instincts and the distress he feels over a girl who’s a victim of parental sexual abuse. The repetitive melody and volume build with layers of intensity while he mixes buzzing bee vibrations and grunt-like noises to depict the father.

Three outstanding songs recount a throwback to early country western stylings. Each song has a semblance of twang in a chord or the high-pitched bend of a guitar string while combining catchy melodies with maudlin topics.  “Gunshy” has the most acoustic folk sound on the album with its sweet singalong hooks and campfire-like strum, singing / I’m not really gunshy anymore / I got my head blown off /. While “Beautiful Mondays” falls into the category of epic Monday songs, woven with seductive country strings and rock-centric guitar licks as McCleery's voice encompasses the saddest whispers and passionate outcries. He assures himself / I think you’re perfect / as perfect as you can be /.  “Yours in Utter Sickness” is a synopsis of the onset of his diabetes diagnosis and hospitalization. McCleery contemplates a suicide note to, / sign my name away /.  He reflects on all the things he loves, like / all my beautiful flowers /nothing could take them away / and imagines how thoughtfully he’ll compose his letter / with the sweetest words I know /. The lyrics are heartbreaking, but I found myself singing / this mother fucker kills me / with enthusiastic zeal to a breakout melody.

Five Years Later has orchestral rock arrangements and sound effects that broaden the contextual listening experience. The confessional country flair of “Landing” adds a lush fluttering flute in the backdrop. “M.F.O.C,” a more traditional rock ballad, uses an echo on the vocal tracks as he mourns the demise of his former self / I cherish you more and more with every day /. The eerie field recordings create a whirlwind of confusion in “Kitten and the Dog Bite,” while the chorus / I don’t want to be the last one here, in this sugar-coated deal, / highlights the struggle and universal pain of divorce. To emphasize feeling small, like a vulnerable kitten, he sings through a World War II Japanese radio tower mic. He feels disconnected, and states / I used to be a winner / as the orchestrated movements peak and metaphorically fade out.

McCleery understood the pulse of the quintessential rock song, adding the essentials without being formulaic. Starting with a gently picked guitar melody, “Reason to Move On” soars with epic guitar runs and an explosive crescendo.  “Orange” continues in that vein with an unforgettable harmony-laced chorus  / where are you / where are you dad / is McCleery’s take on parental neglect. Tapping into a Nirvana-like force, the chorus in “I’m Not a Feather”/ I’m not a feather / you can’t push me around / gains muscle to depict his resolve to recover what he has lost.

The final eight-minute track, “Completely Confused / A Lesson in Love,” makes every heart-wrenching minute count. Starting with a tortured wail of emotion, he surrenders to a self-soothing mantra repeating, / everything you needed / is everything I had / if anything I needed / everything you had /. A beautiful piano passage accompanies a haunting lyric /someone help me escape /.
I found this recording accidentally uploaded fifteen years later on a few platforms with no information and just a sepia-toned picture of a nonexistent band. Every part of my being welcomed this into my heart. It is the truest form of art. For Rob McCleery, it was his only option to do what he loved and wrap himself in music.

This epic rock music was buried on a dusty shelf, a closed chapter in the life of a young man whose dreams were stolen by the necessity for insulin. He was trapped in a vicious cycle of jobs that offered health insurance. He was stymied by a disease that took away his spontaneity, delayed his independence, and altered his music trajectory. With every passing year, his insulin became more and more unaffordable, making the prospect of touring a taxing possibility. He did give it a try.

“I did get a group together, and we played about 60 shows. We sold about 500 copies of the record (which is exactly how many I had mass produced)” ~ Robe