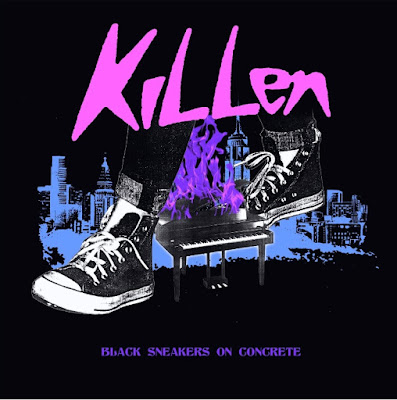 Jack Killen's EP Release show at Mercury Lounge was an experience with live music that I rarely have without being an insanely devoted fan. State the obvious, Killen it!! Holy shit did I just see this. I rarely see music and do no research, which makes me a total Killen newbie.


The crowded room had just enough space to hold a beer and move your arms in the air. Starting with hearing what sounded like a gaming soundtrack on the keyboard, I was giddy staring at the unlikely frontman Jack Killen with his hard-hitting band. He is adorably uncool in a cool way, which had me imagine how Andy Kaufman might appropriate a rockstar. Whatever, you just gotta love him!


Jack Killen’s affection and inclusiveness with his audience are a delight to witness. While playing the keyboard and singing, he nods and opens his arms to affirm his solidarity with his devoted fans. They chanted while fist-pumping these words / I'm going renegade, renegade / and money money money / with repetitive conviction. The comradery at the Mercury felt like a small-scale Pogues show.


Killen and his band play with ease and familiarity. Making music together is just second nature. Alex Forbes's fast guitar darts around the manic keyboard while Mike Henry on bass and energizer drummer Joey Campanella bring on the punch. The spontaneity continued with the finale as Henry switched to saxophone with stand-in guitarist Rikky Walsh. The blinding strobes added to the never-ending climax of intensity, making this Thursday night the ultimate party power-rock experience.


"I’m not Folk,” claimed Jack Killen; he continued, "there is no Folk in NYC.....you go live upstate, I’m staying here."  But with lyrics like / it makes me want to SCREAM / I'm tired of being broke in the land of money / he finds his voice in topical dissent. In his unfolky way, Jack and the band party and protest Killen style. 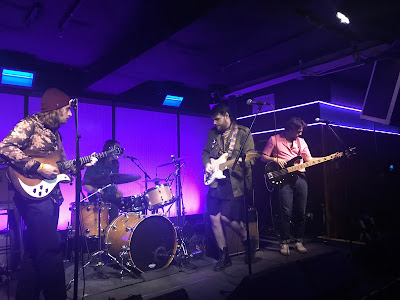 Sixteen Jackies are an infectious four-piece band going somewhere. For the past two years, they've built a reputation in their home base of Philly and surrounding areas. Presented by PopGun last Thursday at Elsewhere in Brooklyn, Sixteen Jackies played between two formidable bands, Ackerman and Oh Malô.

They played a seven-song set from their new and old EP. On display were catchy instrumental hooks, guitar leads that mimic electro-synth, thick basslines, and drums that float between raw and polished mixed with a little grime. Joey DeMarco's high-range dreamy pop vocals produce a surreal mixup of genres when he adds yelps and unworldly sounds. His campy showmanship was in full gear creating a flirtatious connection as he moved around the stage, singing freaky but substantive lyrics. He delivered them tongue and cheek with a wink / I was in a movie / and the movie was bad /. Especially endearing is when DeMarco thanks the audience between songs.

Sixteen Jackies memorable live sets will bring them back to New York sooner than later, and I'm all in.