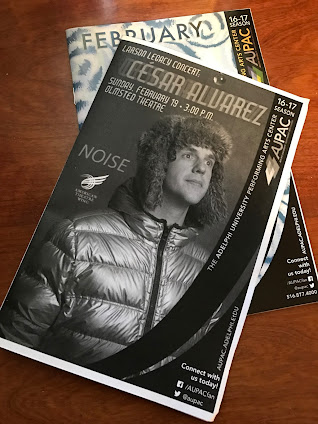 Yesterday I was thrilled to see the workshop production of César Alvarez’s new musical, NOISE, at Adelphi University Performing Arts Center. The Larson Legacy Concert (in association with the American Theater Wing showcases some of the annual recipients of the Jonathan Larson Grant given to rising musical theater composers and lyricists.

NOISE is an interactive theater experience where the actors and the audience are united to hear the “noise.” A unique aspect of the production was the random changing order of the play, accomplished by choosing numbers pulled from a bag, making each performance entirely different. With every new random number, actors had to rearrange audience members on the stage and scramble to get props and move sets. The actors were really on their game.
Inspired by Noise: The Political Economy of Music, the nonfiction book by French economist and scholar Jacques Attali. César uses his concepts to inform the structure and language of the play. Through the history of music, he engages how society creates systems to organize, divide and separate people from experiencing, hearing, and appreciating the noise.

The actors moved, stomped, sang, and spoke while engaging the audience to confront our presumptions and judgments that inform all our decisions. The message was cerebral, while the messengers (the actors) were funny, animated, engaging, and full of life. 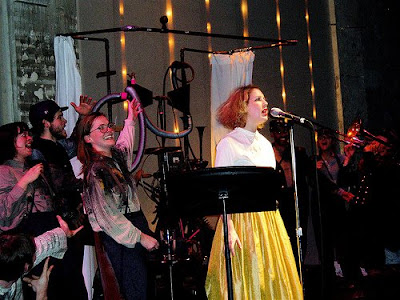 On Saturday night The Lisps concluded their two-night stint of Futurity the Musical at The Zipper Factory. Presented was the music, lyrics, and book by César Alvarez lead singer, and in collaboration, Sammy Tunis lead female vocalist, Jeremy Hoevenaar, bass guitarist, and Eric Farber percussion, all members of The Lisps. The Lisps are a vaudevillian art/rock folk group. They maintained the essence of their music within the context of a musical. The sophisticated lyrics and Old Timey songs mixed with artfully inventive instrumentals were highlighted throughout the evening, making this night of theater unique and never cheesy. Only The Lisps could perform smart, intellectually verbose lyrics, acrobatic wordplay, and sound so light, airy, and entertaining. The vocals combined the talk-sing approach that The Lisps are so good at. He sings, she sings, and basically, they have a conversation through song. César's penchant for the fast-word rant is remarkable. He played his guitar throughout the production, and in the upper loft of the theater were the remaining members of the band Jeremy Hoevenaar and Eric Farber and guest player on organ Kyle Forester. Farber fashioned an incredible drum kit assemblage of found objects. The twelve-member chorus of actors and musicians included the general Sam Kulik playing trombone and sergeant Elias Orling on banjo, rounding out the robust sound. 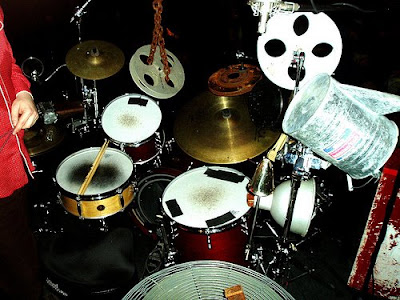 Play Backround: The seventeen-year-old mathematician Ada Byron Lovelace's life changed when she met the 42-year-old scientist inventor. His plans for an analytical engine inspired an exchange of ideas and a fruitful collaboration. In a series of letters between 1842 and 1843, the pair collaborated on seven notes. Her notes detailed how the machine could be programmed to compute a complex sequence of numbers. She is known as the first computer programmer.
Composer and now playwright César Alvarez churns history upside-down with lyrical inventiveness. César Alvarez's music, lyrics, and book take creative license with historical facts. He wove the correspondence of Ada Lovelace, a mathematician (played by Sammy Tunis), Julian Munro, a fictitious Union soldier in the Civil War, and an aspiring science fiction writer (played by César Alvarez) into song. His inventive play spars between a writer's romantic notions and a mathematician's logistic concepts. Inventively he explores the juxtaposition of the envisioned possibilities of the all-powerful machine with the inevitable tides of war. Their altruistic visions are crushed along with the hopes of a promising future. Alvarez creates a black comedy with much room for contemplation.
“Oh the Spoils” Oh the spoils, the increasing mind can sketch Feel like de-fragmented points of turning back. Oh, the toil that the body will forget Through the callusing industrial design.
The Director, Melissa Firlit, does a fine job seamlessly staging the fifteen-member cast. The chorus of soldiers with muddied boots and war-torn uniforms are both men and women, adding a more diverse flavor to the vocals. Like a hat trick, they change into white coats, remove their caps, and don some glasses to become zany caricature scientists. They respond with over-the-top comedic dialogue to the scientific notes of Ada and grandiose visions of Jules displaying a geeky academic elitism. The unveiling of the "all-powerful machine," a combustible contraption looking like a marvel of the futuristic assemblage, was the essence of the finale. The machine explodes and bursts into flames while simultaneously, the soldiers die on the field. This cemented the moral of the story told.
"Gravestones” Gravestones don’t know They mark the fallen teenagers Stolen from Earth in a moment of flames.
Futurity marks a passage between the past and present. As we witness the technological revolution, we are always aware of cataclysmic events and impending wars that threaten our future. Yet we still hope and marvel at the visionaries who forge ahead and envision the impossible. The young and talented cast only highlights how valuable the arts can be in mirroring and invoking thoughtful opportunities to understand where we are and where we are heading. I hope Futurity The Musical finds a home so that others can appreciate all it offers. Kudos to The Two Man Gentleman Band for doing a fine job performing as the crowd was seated. Kicking off their five-month tour of the US, Andy Bean and Fuller Condon played lively old-time music interspersed with kazoos and witty dialogue. Their gentlemanly ways are a throwback to another time. 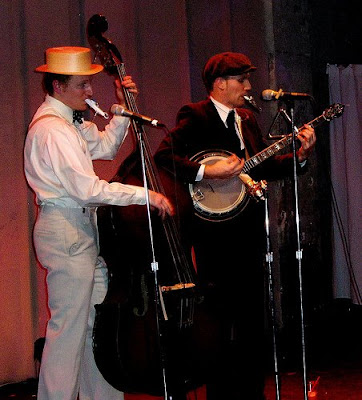 The Lisps Musical; The Zipper Factory 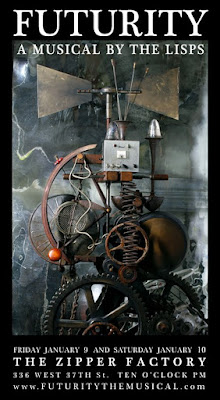 The Lisps debut of their musical Futurity will be at The Zipper Factory this weekend on Friday and Saturday night. I am sure this ain't no typical musical. After seeing them perform at CMJ, I was blown away. They are smart, edgy, and entertaining. "The foursome creates quirky cabaret folk-art-rock whose vaudevillian staging augments their stellar sound. They combine great vocal arrangements with off-center instrumentation. The guitar, bass, and drums are combined with snippets of melodica and spiced with eccentric percussion accents like the banging of a soft mallet on a metal cabinet or hammer on a drum kit." OCM 10/08 Futurity: It is about a Civil War soldier corresponding with a mathematician and writing a science fiction novel about an inventor creating a steam-powered artificial intelligence that he believes is the hope for humanity. Luke Winslow King opens the show on 1/9 Two Man Gentleman Band opens the show on 1/10 I am not a Broadway kind of gal but off off is my kind of thing! See you Saturday! tickets
Posted by ARTIFACT at 10:33:00 PM No comments: