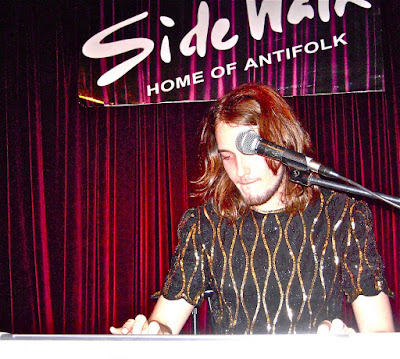 Max Vernon is colorful, flamboyant, and fashionably overstated, much like his outstanding music and songwriting. In one of his YouTube video entries, he was asked about a harsh email from his mother where she wrote, listening to your music is like eating nine courses of foie gras, and no one wants that many courses of foie gras. It was an interesting comparison, with apologies to follow. A loving and caring mother was concerned about Max’s appeal to a broader audience. Max Vernon, I believe, can create timeless and great pop songs, and maybe he will someday. But for the last year, he has been recording smart, politically topical, catchy, gender-bending, not neutral material. Max Vernon is true to himself.

Charmingly relevant and bright, he works it from the visual and cerebral to the sonic. That was clear at his set during the Anti Folk Fest at the Sidewalk Cafe. The talent is apparent but what comes through is a genuine performing style that is relaxed and personal. His set was quite beautiful. I'm glad he came with his keyboard placing himself front and center even though I saw a piano on the side of the stage. He didn't go for the easy listen, in fact, he chose to play his most challenging material. I knew I was in for a treat when he opened with “Diamond Dust,” a song with many twists and turns vocally and on keys. He introduced "All I Need" by saying something to the effect, "this song describes my love life." Then he invited us to sing along to the chorus; / you’re not all I need / you’re not all I need / you’re not even close /,  but I like you, I like you. Although I like to sing, I wouldn't miss one minute of hearing Max Vernon’s spectacular interpretation. He added some yodeling extras splicing his highest pitch and intertwining it with his awe-inspiring low register.

"Love At Last," dedicated to Michael Jackson, is a brand new song that he had never played live, and it was awesome!!! The new material added an edge of enthusiasm. Playing keys combining Rhythm and Blues circa (mid 60's), back alley honky tonk, and classical. The chorus has a celebratory atmosphere mixed with the somber fate of a fallen Icon; Hallelujah / best friend though we hardly knew you / don’t it feel good to finally be loved at last / till the bullet rips through you.

He ended the set with a Morrissey cover featured on TMS (The Music Slut) compilation dedicated to Morrissey's fiftieth birthday, "Head Master Ritual."

Max Vernon can capture attention through his incredible music gift, but I realized tonight how well he can translate his talent live. 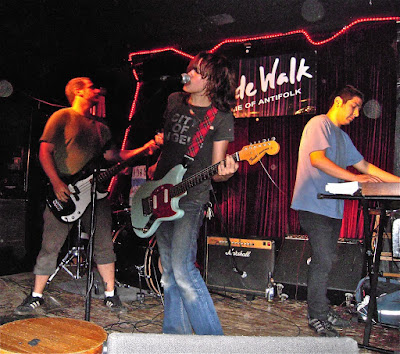 Clinical Trials
I always arrive early to events. So I was surprised to hear about a very impressive rock band Clinical Trails. Fronted by a female singer and guitarist, Somer Bingham, accompanied by an all-male group on bass, keyboards, and heavy-hitting drums. It was so cool and disconnected to be sitting in a lovely cafe and watching and hearing such a rip-you-to-shreds set. At one point, Somer asked if anyone had an A string. Her vocals are a cross between Joan Jett, Patty Smith, and Pj Harvey but her performance persona has a rock-in-your-face attitude disguised in a beautiful he-she image. Gorgeous and riveting. Check their site for upcoming dates. The Trash bar is a perfect choice.