Wow! The first time I laid eyes on Showpaper my jaw dropped. It is a beautiful biweekly foldout that features original art on the cover and lists and promotes all-ages DIY music shows in the NYC and tri-state area. The Showpaper non-profit model blends the best of DIY culture with a formal approach. Unlike fliers and picture files, Showpaper creates an artifact of culture in hard copy form to be cherished and collected. Showpaper listings advocate a viable alternative for young people who are adept music connoisseurs and are banned from established venues. The listings are in lofts, garages, houses, alternative spaces and parks. Maya Hayuk issue 31
The DIY music scene has always included art in the form of zines, handmade objects, and silkscreen show posters. This underground aesthetic is not abandoned with Showpaper but expanded to showcase artists who broaden the idea of community. Often artwork in the established art world is not accessible. It is shown in formal settings and viewed as a commercial product far removed from the process of the studio. Art is moving beyond the constraints of the gallery. The Internet is changing that accessibility, and artists are reaching out to define themselves differently. Yes!! This is an exciting time to be an artist! A sampling of Showpaper Artists (Roster) If you have the time or inclination, viewing the diverse artist’s work is quite fascinating but delving into their sites is an informative and eye-opening experience. The Sumi Ink Club issue 11
The choice of The Sumi Ink Club exemplifies the meeting of art and community. The club's mission is to create a collaborative drawing using ink on paper. Just imagine the state of the world if we all just gathered around a giant coloring book and talked. The Sumi Art Club uses art as a vehicle for communication. The visual results are as delightful as the group’s intent, founded by Sarah Rara and Luke Fischbeck (AKA Lucky Dragons). 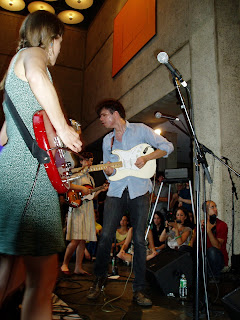 [To appropriate something involves taking possession of it. In the visual arts, the term appropriation often refers to the use of borrowed elements in the creation of new work.

The Dirty Projectors new release Rise Above due out in September is a conceptual tribute and not a cover release. The Rise Above tour presents interpreted compositions stimulated by memory of the band Black Flag’s influential 1981 album Damaged. Dave Longstreth's composed Rise Above by accessing his subconscious using a technique called automatic writing that was embraced by the Surrealists. They used it to expand their creative possibilities.

Lucky Dragons AKA Luke Fishbeck is a digital music composer, who applies a distinctive homage to the category of happening and performance art, utilizing digital music and video installation. Within the realm of digital music composition he has appropriately titled his latest recording Windows. Luke Fishbeck music is created with instruments, voices and sound discoveries that are transposed and altered digitally. His self awareness has enabled him to be an open receptor to the world around him, guiding his music composition to create inference and sound visuals.

It was very appropriate to see Lucky Dragons in a museum setting. The focus of his performance is to create a dialogue with the audience that fluctuates between voyeurism and direct participation. He set up large screen on the side of the stage setting and on the floor was a laptop connected to audio extensions that lengthen outward into the space. Much like an extension cord or that of an octopus with musical tentacles. These receptors convert sound through touch and movement. 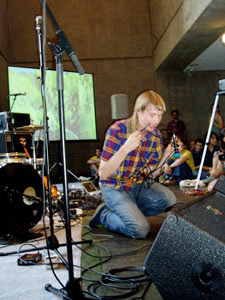 e all synchronized with the music.

Luke is a very tall and striking individual. He started on the floor sitting on his knees hovering over one of the receptors passing the signals of his body movements to alter the sound frequencies. We watched him personally and physically submit to becoming an integral part of the sound. Experiencing the music through him is the ultimate form of conduction. The set continued and his body contortions became convoluted as he ran microphone wire up, around, under his torso, through his legs and then up to his mouth. Never looking up at the audience he unabashedly was consumed in his personal ecstasies. I was a willing voyeur.

Suddenly the interaction with the audience began in a strange and unsettling way. He crawled and undulated forward to various people in the crowd still in his private cocoon rocking and darting blindly forward. Then he connected and unwo 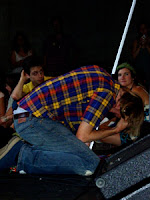 und the colorful wires that were vibration sensitive and brought various audience members to touch the receptors and collaborate in creating a new music dynamic. The unexpected nature of participation is what informs the music at that point.

Lucky Dragon uses contemporary technologies that are generally removed from human contact to awaken pathways that touch the spirit through sound. . If you’re daring you will stay. If your open to new ideas, you will be inspired. I was.

The dynamic sound that this group creates is mainly the result of original and daring harmonies mixed with extraordinary guitar patterns and vigorous drumming. The electric guitar flutters with atypical leads and is coordinated with one note picking of the alternate guitar. Dave Longsteth’s voice reminds me of Prince and has the range of Rufus Wainwright. Sometimes it borders on soulful pop affectations and that alone could be cheesy but mixed with the other vocals becomes original. Without the aid of chord progression the vocals remain on target. Their astute registers and informed pitch explore melody without boundaries, creating harmonic levels that astound. 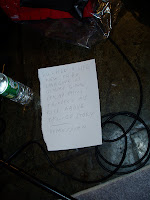 harmonies of the female members. His guitar breakouts were especially effective during New New Attitude where the wild man came out and the three part blending of harmonies wowed. In the song Gimmie Gimmie Gimmie the vocalists created a round and the effect sounded like a modern version of yodeling. Each member taking on different measurements and blending them strongly to resonate. They ended the set with Police Story and the encore Depression. Aside from the utter beauty of the sound the set was energetic and exciting. Dave Longsteth and drummer Brian Mcomber really broke sweat while the women presented a calm focus necessary for acute harmonies.

These two music groups share sensibilities and are daring and open to the possibilities of moving music composition forward. There is no greater place to see them do this then in a contemporary art institution that prides itself on being the barometer of cutting edge direction in the visual arts.

Thank you to Brooklyn Vegan for posting the show and the Whitney for curating this line up.

Listen to the Dirty Projectors' New New Attitude from the Day Trotter Sessions.