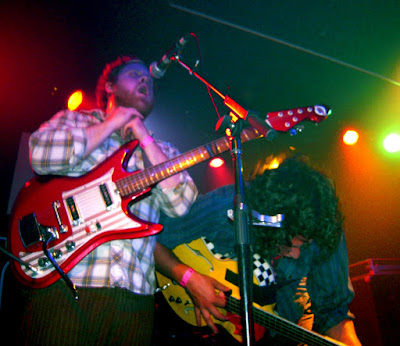 Santos Party House has a nice vibe, and I love the space. The stage is wide and deep, which offers a lot of room for the performers. It has just enough space for the audience, not too big or small. Its square shape appeals to my feng shui sensibilities.

It was a fun, relaxed atmosphere at The Santos Party House, presented by Adult Swim. Our two hosts, Dave Willis (voice of Carl and Meatwad) and Dana Snyder (voice of master shake and Granny on squidbillies) had a prime-time audience familiar with the shtick and inside jokes ready to dive to pick up random objects being thrown from the stage. The early bird crowd was feisty for 7:30 so when Drink Up Buttercup was introduced, I was surprised that they seemed unfamiliar with what they were about to experience.

The light hues and added fog worked so glowingly with Drink Up Buttercup's electrifying over-the-top set. The larger stage area let Ben Money out of the cage to strut, stagger and pluck in free-range mode. His bass was never in the horizontal position. "Honey Honey" sounded great with an Afrobeat that slowed down only to re-energize in full force. It didn't take long before DUB's enthusiastic infection spread. They announced the last song, but after it was finished, the audience demanded more.
Oakley Hall Had a pretty long setup and sound check for their very short set. They are a country-tinged band with gospelesque vocals with some nice instrumentation. I especially liked one of the songs where the bass and vocals compete sonically. They ended with a multi-layered vocal that made me think I heard a full church choir. Unfortunately, It ended before it began. 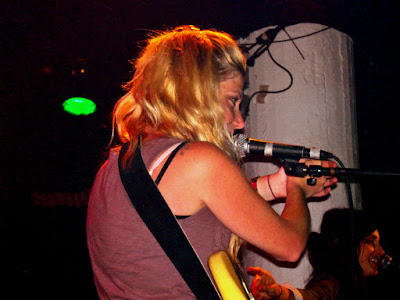 Marnie Stern and company were a delight. A wild veteran punk hybrid of sorts where instrumentation is important, but the raw is magnified. Marnie's high-pitched yelps were spliced perfectly between her faced-paced guitar leads using both hands up the fret. The sound is less nuanced than typical guitar leads. Her confident attitude is striking, and she enjoys playing her instrument. Malia James played the bass and applied rhythms in a reactive style. The drummer Jim Sykes deserves major Kudos! Keeping time with unstructured rhythms is an art form. I was instantly taken with the sound and spirit of Marnie Stern. 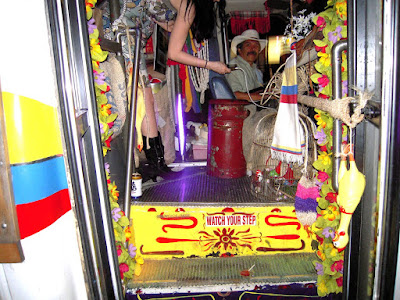 A crazy unexpected highlight of my night was a campy, kitschy visit outside the venue by a rocking mini bus on wheels blasting music and filled with an energetic dancing crowd. It was the I Got A Heart On promotion for the new independent movie Paper Heart. The bus stayed in place for about twenty minutes. When the driver started the engine, the bus pulled away from Lafayette Street "Day O" (the Beetle Juice version) accompanied the sweaty dancing bodies! How Fitting.
Drink Up Buttercup OCM Flickr Set Marnie Stern OCM Flickr Set
Paper Heart Bus OCM Flickr Set
Posted by ARTIFACT at 1:15:00 AM No comments: