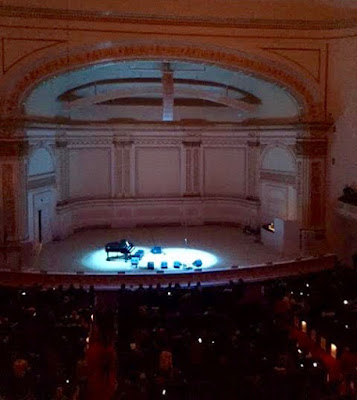 The minimalist stage was set for a solo evening with Conor Oberst. Conor switched between piano and guitar while the harmonica remained a constant. His songwriting took center stage at Carnegie Hall while the instruments like jewels glimmered around his poignant lyrics. In the performance's first half, he played his new album, Ruminations, in full. Having purchased Ruminations recently, I was familiar with the raw pared-down recordings. The accompaniment of Miwi La Lupa on bass and the acoustics at the Carnegie created a dichotomy giving the magnitude of the song while hearing private intimate songs become very public.
In the second half, he played older songs curated for content. They were familiar and, with the advent of time, took on new meaning as history unfolded post-election.

Lenders in the Temple, Cape Canaveral, White Shoes, Passing Through (Leonard Cohen cover and dedication), Ladder Song, Lua, The Big Picture, and At the Bottom of Everything.
Whether the material was old or new, each word sung echoed through the majesty of the hall. Speaking to me as they always have for the last 16 years. Conor has become a seasoned performer, his lyrics carry levels of imagery and inference like no other. His phrasing and delivery create the winning dynamic as chosen words are highlighted for effect or a consonant is pronounced with clarity.

The audience at Carnegie Hall cheered from the top tiers every time Conor sang the line /victory is sweet, even deep in the cheap seats / from the song “Cape Canaveral.” The sound experience was the same regardless of the seat's price or location. The only seat I would have really liked was Sean Foley’s (harmonica cleaner) next to the grand piano with a fishbowl full of water. 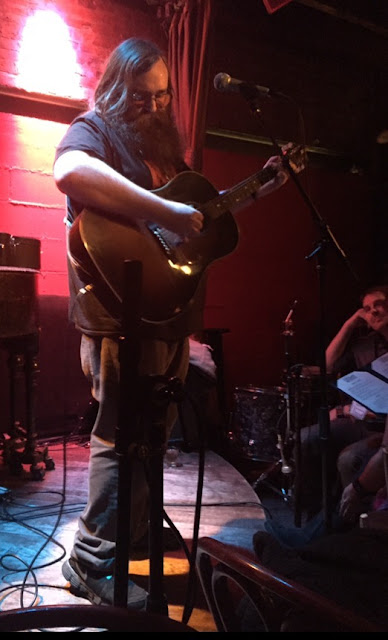 There is no better healing for a beat-up soul with election blues than powerful live music. Thank you, Adam Faucett! Was I on sacred ground or stage 1 at Rockwood Music Hall?  His voice bellowed and reverberated from the rafters and made me a believer. When he brought down the volume, the soothing tenderness of his voice settled inside my spirit. His poetic songwriting was delivered like a moving sermon. I am not religious but sign me up!

Two other newbies were sitting next to me and said, "There is nothing better than discovering extraordinary music accidentally."
http://www.adamfaucett.com/music 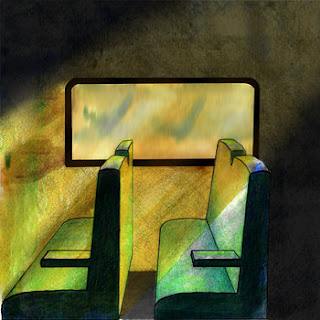 Peoples Rohoss is a power trio. Two brothers and a childhood friend who plays a scattered rock mix of guitar, bass, cello, and drums, intertwined with high-frequency vocals and woven with an adventurous orchestral sound. They rely on improvisational chance and musicianship that they synchronize with each other. To say they are interactive is an understatement.

Their EP Four Star Mecca takes all those elements and blends them to create a statement.  The “Intro Song” is an orchestral rock composition that combines unfamiliar instrument sounds with distant vocals that fade and suddenly vanish. Surprisingly ”Young Elitists” starts as a poppy punk song with the catchphrase / It’s two AM / we're wide awake /. The song's muscular start pauses only to pick back up with an outpouring of energy. It ends with a lone guitar player's mindless strumming, possibly imagining this recording was his pipe dream.

The lyrical hook / to find the grays in this dotted space /mimics the sound of discordant melody in the song “The Four Star Mecca.” It is a high-powered mix with splattered vocals and drums that sound like dropping bombs. Coming on strong is the appropriately titled “Back and Forth,” in which every instrument commits to an intense dialogue creating an invigorating tension. The vocals / It could have been bittersweet to go home, stoned / come in gently in contrast to the rough and tumble mix. Closing this unique collection is “The East End,” which starts with a seductive, strong bass line and has a rousing and unpredictable exuberance that builds to a crescendo following the phrase  / you always run / but never make amends /and pauses with a drum roll.

This EP collection is invigorating smart rock music. It is not an easy listening experience, and that is a compliment.
,
Peoples Rohoss Bandcamp
Bass / Cello - James Acampora
Drums -Sean Perham
Guitar / Howling / Everything else - Mike Acampora

When I first heard Sawyer Fredericks's deep, soulful, and emotionally charged voice, I was immediately captured. My heart was racing, my eyes were welling, and my emotions were being played like a violin.

How was this possible? It was just a Monday night, and I was mindlessly watching The Voice. The emotional connection Sawyer expressed while singing was channeled through the television screen and seemed to be directly aimed at me. It was as if I had receptors and was open to receiving.

Sawyer’s voice can elicit longing, empathy, aching, and compassion. It is especially potent when he reaches for high notes, and it warbles and vibrates while emoting every last drop of feeling.  At times he sings quietly or pauses so that a word can linger, and within a short time frame, he can powerfully amplify his voice to soar with energy and surge with purpose.

What was most delightful to discover was that Sawyer Fredericks is a songwriter. Through his thoughtful phrasing, he masterfully sings and shapes words that resonate with the listener.

That night I was ready to receive and surprised to find so many viewers obsessively hungry for genuine original music. My reaction had something to do with the fact that certain genres of music are rarely celebrated on mainstream television.

One added detail really sparked my interest. In several interviews, Sawyer Fredericks mentioned one of his favorite artists is Langhorne Slim, someone I've been writing about since 2006.

Hello, Hello, I know you’re there.. Well, I just need to talk....... OMG, this video is so cute, and the song Answering Machine by the pop duo Faren and the French Fries is sooooo catchy!

The Children’s Museum of the Arts (CMA) art colony class has created a POPTASTIC video production (as described on CMA’s blog). Watch for the credits with the featured kids and a listing of the production team of teaching artists along with Faren and the French Fries's song “Hey You.”

CMA's new headquarters will be a 10,000-square-foot former loading dock in Hudson Square at 103 Charlton St. The grand opening is set for Oct. 1. 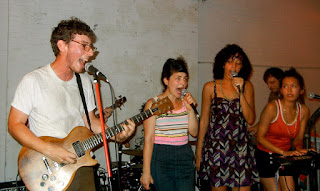 Ava Luna played a show at the Clock Tower as part of the Above the Law Series curated by Joe Ahearn. One flight up from the 13th floor and adjacent to the roof, the audience squeezed in close for an intimate experience.

This is a great band, and the acoustics in the space only enhanced their sound. We were all lucky enough to hear almost a complete album of gems performed for the first time, creating an immediacy and edge.

Dynamic acoustics, crazy awesome harmonies, soul strutting, and hard-hitting music structure were made for a listener who enjoys being challenged. Ava Luna combines many music genres, creating a jumbled juxtaposition of dynamic excitement.

Style Meets Substance; A Poets Guide To The Bars 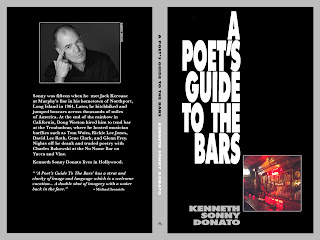 Style counts today, even in the world of poetry. The latest reprint of Kenneth Sonny Donato’s “A Poet's Guide To The Bars” has hit the shelves, bringing poetry up front and out of the backroom's dusted stacks of treasured finds.
Pax Americana Productions, LLC has curated Sonny’s poetry into a visually graphic format where text, imagery, editing, and layout meet to house his retrospective of legendary LA bars in which dreams are one shot away. For online promotion, they have created a must-see book trailer. (below)


Kenneth Sonny Donato reads and shares stories alongside his friend Harry Dean Stanton, to whom the book is dedicated @ Book Soup on Wed. Aug. 3, 7pm.
Posted by ARTIFACT at 2:25:00 PM No comments: 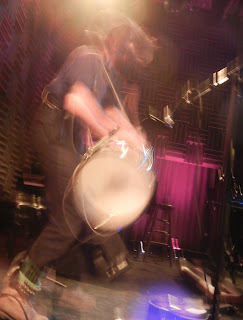 Geo Wyeth’s masterful skill and intentional hesitation created an edge of uncertainty and unpredictability at his solo show at Joe’s Pub last night. Although the set was clearly planned, it felt like a conceptual foray into musical chance operation.

Geo opened with the set, creating a disorderly clutter of drum beats with a strapped-together Tom Tom. He paced through the crowd, leading his parade to join the guest saxophone player on stage. He played the baby grand with unbridled force and exuberance throughout the set. Geo sang with conviction but created a vocal stutter, suspending his vocals in mid-air. While playing a handheld Casio, he sang phrases gathered from field studies of New York conversations.  When he picked up the acoustic guitar, I didn’t expect it to be beaten with a drumstick.

Whether he played the electric guitar, keyboard, baby grand, or drums, each instrument provided an opportunity for self-expression and undeniable experimentation.
Posted by ARTIFACT at 9:09:00 PM No comments:

Introducing Faren and the French Fries

What a great way to start the new year with a bang and the song AK-47 from Faren and the French Fries.
Myspace
Posted by ARTIFACT at 10:22:00 PM No comments:

Labels: Faren and the French Fries

The song "Well Alright" from Peasant's 2010 release Shady Retreat is featured in this sweet and simple video. Perfect......
Posted by ARTIFACT at 8:05:00 PM No comments: