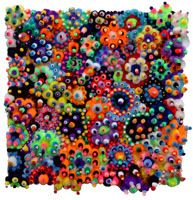 Cake Shop is now displaying monthly art exhibits on the upper floor curated by Ben Furgal. The show in January featured the work of artist Evie Falci. A closing reception will be tonight.

Dina Kelberman of Important Comics and Wham City notoriety will present new works from February 1st to March 1st. Opening reception on the 1st with The Creepers, Mason Ross, and Santa Dads.
Posted by ARTIFACT at 5:17:00 PM No comments:

Hold Your Nose and VOTE. Don’t stand on principle

Another four to eight years of Republican rule. Believe me the country will do it again. Swift boat ads, you ain’t seen nothing yet. Just remember, Bush’s misuse of the "bully pulpit" to advance his agenda. Do you recall the orange alerts in NYC timed before major legislation and elections? They will do anything to win.

I have to admit I get annoyed with the Democratic field. No one has any balls or ballets. Unfortunately pandering is a necessary part of being elected. Even now, I am certain that the Republicans will win especially if Obama or Hillary are to rely on young people to vote. Many are not registered and don’t even bother. Remember the last presidential election?

The music world is upside down and inside out. The soundtrack for the movie Juno featuring seven tracks by a little-known DIY songstress, is at the top of the Billboard charts. Through subliminal exposure, Kimya Dawson’s recordings are featured predominately on the soundtrack. Kimya Dawson is in a unique position.

She has been creating great music for years with her first band, The Moldy Peaches, her solo projects on K Records, and a new side project, Antsy Pants released on Plan-it x Records.

About seven years ago, I remembered a family car trip listening to the Moldy Peaches. We are an open-minded lot, and we sang along to “Whose Got The Crack” from the Moldy peaches 2001 release with giddy delight. Not to worry, anyone listening to the Juno soundtrack is not savvy enough to find this little-known gem, and what would they think of it? 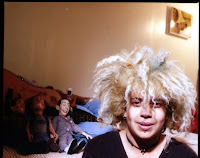 n is well-known in DIY circles. It is great to see a talented, hardworking musician songwriter like Kimya gain deserving recognition. She has given and shared with her fans and other musicians and will not take her success lightly. She will bring others along.

It is out of the ordinary when DIY culture meets the mainstream. When music artists, directors, screenwriters, and filmmakers on the fringe meet the mainstream culture. What happens? People like the movie and the soundtrack. Exposure is an interesting concept!

Non-commercial entities are now being positioned next to commercial properties. The Placement for Indie bands on commercials, TV placement in dramas and movies.

Listeners who think they hear all the latest in Indie music by tuning into college radio or hearing a playlist from KCRW would not have been familiar with Kimya Dawson’s music. To know about Kimya and the many musicians she tours and collaborates with, you must be a proactive music listener, familiar with the DIY culture, a Web board surfer, and a house show participant.

Web boards like Plan-it X, Absolute Punk.net, and Punk News.org support local DIY scenes all over the country. Word-of-mouth mixed tapes and house shows, doing it DIY style in full. This does not mean just booking and arranging shows. It is about communities where music is the focus, and everything else revolves around it.

Music is about sharing. If your only sharing with a chosen few, that is OK, but reaching the broader culture is a more interesting scenario.
Kimya Dawson MySpace
Posted by ARTIFACT at 11:02:00 AM No comments: 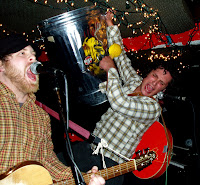 Drink up Buttercup does something few bands know how to do. They put on a great show. Headlining at the Cake Shop only makes it better. Their insanely zany acrobatic stage antics mixed with a full-bodied sound of harmonic delight, produced an atmosphere of sensory overdrive.

The garbage can and auxiliary percussion were banged and harmonies fully intact. Involuntary operatic passages and rough bawdy instrumentation all came into play. What emerged is a band worthy of praise.

The crowd was deep in the dank basement of the Cake Shop, comprised of new and recent converts. After the show one newbie on vacation from Dublin, enthusiastically rattled off a list of influences that she felt comprise their sound. She sited, The Beatles (Sgt Pepper), Beach Boys (circa Pet Sounds), The Kinks and punk influence The Clash. It was nice to hear a fresh point of view and one that was so acute.

Drink Up Buttercup’s sound is an experimental melding of the best of various styles. Unbridled and openly, unchecked.

I derive pleasure from content driven songs and music that enhances lyrics. It is very unusual for me to LOVE a band like Drink Up Buttercup. I don’t give a shit about their lyrics. “Sosey and Dosey”, who are they, who cares. They played that song with a one two beat adding the crashing drunken keyboard. The sound broadly grew when the harmonies reached an explosive volume, singing / he held her mittens in his HAND......Every song in their set was delivered with that kind of gusto and bravado.

Accompanying them on stage for their last song “Gods and Gentleman” was the ramshackle audience orchestra, beating any form of percussion they could find. That was the clincher. The crowd craved more and Drink Up abandoned their mics and delivered an acoustic rendition of “The Lovers Play Dead” in the middle of the venue. With their shakers in hand, they included us in their energetic music circle of warmth.

For me, the only downer of the night is when a very beautiful young woman asked me quite sweetly, if I was one of the band members mother. Damn, I might be old but life is short, seeing Drink Up Buttercup is worth my time and yours. 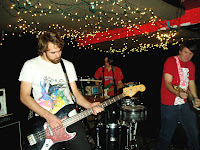 : Trtl soup
Trtl soup combine cool geeky tech mixed with a DIY low-fi attitude that is refreshing. Bass, guitar and drums are interspersed with an audio system of spliced sound frequencies. The bands occasional ranting vocals, stood out in a funny way / girls go to college to gain more knowledge / boys go to Jupiter to get more stupider /. United with the light moments is a socio political edginess and sound assemblages that reflect our subliminal communal consciousness. Interesting Group! 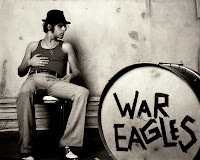 Slim Has Found a Home!! Langhorne Slim has signed with Kemado Records. The much anticipated self-titled album their fans have been waiting for will be released on April 29th.

uttercup @ the Cake Shop 1/19/08 Saturday night. You know what I'll be doing!! If you can't catch them tomorrow, they are doing a residency at Piano's during February, on Tuesdays!
Philadelphia Weekly
Drink up Buttercup myspace 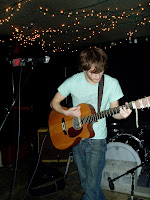 t AKA Damien Derose Coffee Shop Series: Starting on January 29th with a creative acoustic lineup at the Cake Shop: Chris Archibald of the band Illinois doing a solo stint, Peasant, and Ben Thornewill of Jukebox the Ghost.
I can't think of anywhere I'd rather be.
Check Peasant's myspace for a complete schedule.


Sgt. Dunbar and the Hobo Banned the new Release

The Thing About Time
Looking forward to seeing them again!!

MySpace is today’s lifeline and reality for bands and musicians to gain exposure. To put it down is irresponsible, even in the context of an article about the sudden rise of the young British singer Kate Nash. Sasha Frere-Jones's article in the New Yorker,
“Full Exposure, Making it on MySpace,” presents the perils of early MySpace exposure. While he cites specific pitfalls like adolescent blogging entries and massive hits before gaining experience, he devalues the necessity of MySpace as a tool for others.

I think full exposure occurs when hungry predatory labels are willing to promote artists before they have ever performed live. They are exploiting a situation and are blinded by dollar signs. The Kate Nash phenomenon would not have happened so fast without label intervention.

Sasha Frere-Jones states that Nash deserves a shot at stardom because of the strength of the song “Foundation” on her album Made of Bricks. This assertion contradicts the premise of his article.

The UK is unique, and Mr. Frere-Jones underplays the power of geographic location. In the UK, the airwaves are free and without the domination of the Clear Channel. Their radio system can facilitate the major label promotion of a quirky, commercially viable talent like Kate Nash. That is what makes her sudden Web-to-chart success possible. The hype machine can be generated at mock speed. This does not happen in the US, where the radio playlists are in every category but new music.

MySpace is the preferred vehicle for band exposure and plays an important role, especially in the States. Many bands that get recognition eventually have to do it the hard way, self-promotion via MySpace. That includes constant updating, posting tour dates, sharing pictures from the road, and communicating with fans.

A band's website is a dinosaur. It is stale compared to the fluidity and interactive nature of MySpace. I say fuck the Website. Bands generally write on their Website; please visit our MySpace page for updates.

Until there is another vehicle with more unique features tailored to music, MySpace is here to stay. MySpace is a band's history; like email history, it is filled with information that would be difficult to replace. I’m not saying that MySpace doesn’t have its problems; it can be a royal pain in the ass. Ever been "phished"?
Posted by ARTIFACT at 9:23:00 PM No comments: