I am an anomaly. I am a 56-year-old music Blogger. I will admit that before starting this site, I was computer illiterate. Yes, I could surf the web, answer emails and send attachments. I understood the powerful ramifications of the online community but lacked the knowledge to implement my enlightened visions. I can now explain how it works without sounding ridiculous, but my implementation skills, while getting better, are still limited. I can envision trends and movements on the Web and see the power of new possibilities. As large corporations and media empires have access and visibility, so do others willing to take the time. The egalitarian nature of communication from many platforms is possible. My focus and contribution have been to the music community. I watched CSPAN and was drawn into a panel discussion by the Personal Democracy Forum in New York about how the Internet has been utilized in past and current presidential campaigns. The panel's mission was to be informative and nonpartisan. My eyebrows were raised when Tracy Russo (John Edwards campaign blogger) challenged Mark Soohoo, (the McCain McCain e-campaign director) about his candidate’s lack of computer literacy. While she made legitimate points, she was apologetic about swaying from the panel's intent. I share her concerns and think there should be no apologies when raising such a vital issue. Lacking a basic understanding of how the Web functions is a hindrance. To fully grasp the possibilities of this vastly growing entity, I think a president should have a grip on the potential future of this information evolution. He should envision where it is going. The global connectivity it provides has a broad scope of possibilities. It can be the catalyst for solving our world’s most difficult problems. Just imagine, the future of the global web community within fields of science, music, art, media, and politics to name a few. Just think YouTube was launched in 2005, and in just three years, a massive global community is developing with far-reaching significance. I might be old, but I welcome the renaissance of possibilities that is the Web.
Fascinating video: Information R /evolution
Tracy Russo response post
Posted by ARTIFACT at 11:20:00 PM No comments: 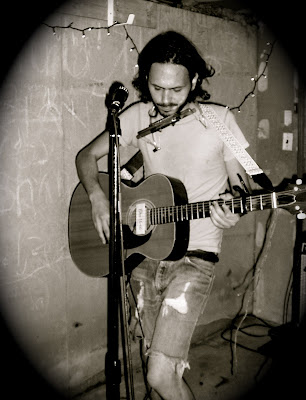 So...... The always evolving and fascinating, Wildebeest (Matthew Winn) did a Pink Couch Session at If You Make It a while ago that was recently uploaded. Clocking in at twelve minutes, Wildebeest sings/speaks with a touring guitar, harmonica, a smoke, and a flask. He also has been performing similar long rants with chimes!

Recent Wildebeest MySpace Post News
I have published a short story New Reality Competition, and a book of poems Taste Lie Paper. Both are between 30 and 50 pages, cost 5 dollars, and can be obtained by emailing me.
Posted by ARTIFACT at 9:33:00 PM No comments:

Unlike the Fox News Virus Novice Theory, AKA Geo Wyeth is worth spreading around!
Full Homophonic video interview at After Elton
Posted by ARTIFACT at 8:24:00 PM No comments: 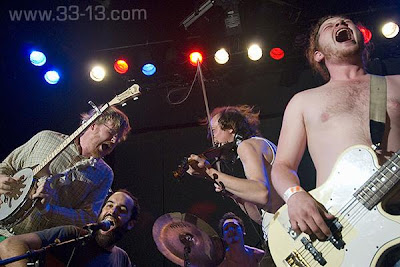 During the month of February o’death recorded with Alex Newport (Two Gallants, At The Drive-In, The Locust) behind the boards. They are sharing the song “Home” from Broken Hymns, Limb & Skin to be released sometime this year on their MySpace site.

“Home”, starts off slowly. The chorus of / home, home the air I breath / scaffolds and rises to break through, and breakthrough it does! Listen here.
Posted by ARTIFACT at 10:13:00 PM No comments:

I am looking forward to seeing two favorites, Ramona Cordova and Francois Virot in New York on July 1, 2008 Venue TBA........ repost of bulletin below...... REST IN PEACE FRIDO -- 21 JUNE 2008 Frido Korea, bless his little heart, passed away the other night before the Madison show. yes, the truck is dead. I'll be continuing the tour by public bus and some help from friends... François is not going to make it for the Canada shows, Burlington Vermont, or Biddeford Maine. He might meet up in Albany to continue the tour through the end, or it might just end up that he plays Cambridge, Baltimore, Philadelphia, and New York as his last four dates. let see! See and hear how awesome they are!!
Posted by ARTIFACT at 5:55:00 PM No comments: 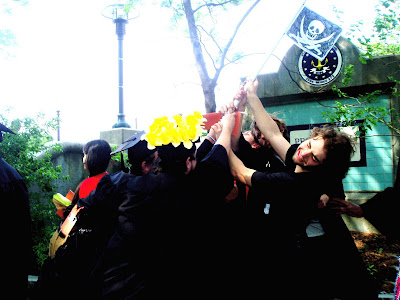 Multi-media artist /composer Laurie Anderson said to graduates at RISD, “I can’t think of a better time to be starting out as an artist." Her inspirational commencement speech touched on her unconventional journey as an artist. She shared some survival strategies with the graduates. Communicating that working beyond conventional boundaries and taking risks helped her to invent and reinvent herself at every turn. Including her stint as the first and only artist in residence for NASA.

Anderson suggested that the artist could reach a wide audience today using great digital tools and do it without being aligned within an institution, collection, or corporation. With that in mind, the question of ethics and responsibility was brought up to ponder.

She quoted the first paragraph of George Trow’s book Within Context of No Context and then wove its premise, the “size of the con” from a social, cultural, and political perspective. Examining the power of the media to spin its own reality, she posed provocative questions, giving the listener a chance to weigh in cerebrally; “You have inherited a story-savvy government, one willing to use spin and multimedia to tell its stories. So what are the true stories?”

"Wonder was the grace of the country. Any action could be justified by that: the wonder it was rooted in. Period followed period, and finally the wonder was that things could be built so big. Bridges, skyscrapers, fortunes, all having a life first in the marketplace, still drew on the force of wonder. But then a moment's quiet. What was it now that was built so big? Only the marketplace itself. Could there be wonder in that? The size of the con?"
George Trow

"Artists really do see the world from a very different point of view", she went on to plead her case for the artist-in-residence program at NASA to be reinstated. Making a broad assertion of the possibility of the artist in residence in Congress, the Supreme Court, and the White House. "There is a Department of Defense, Department of Health and Welfare. How about a Department of Art?"

I felt the need to share her words with anyone inventing their destiny through creative endeavors. More than ever, our world needs talented individuals who can disseminate, unravel, and envision new possibilities for the world. The time for her questions is appropriate now.

Something to Ponder!
"The work of television is to establish false contexts and to chronicle the unraveling of existing contexts; finally, to establish the context of no-context and chronicle it." George Trow